Sinusitis is a condition characterised by inflammation of the paranasal sinuses which are the cavities located behind the forehead, cheeks and eyes. It occurs as a result of infection by viruses, fungi or bacteria.

There are two types of sinusitis: 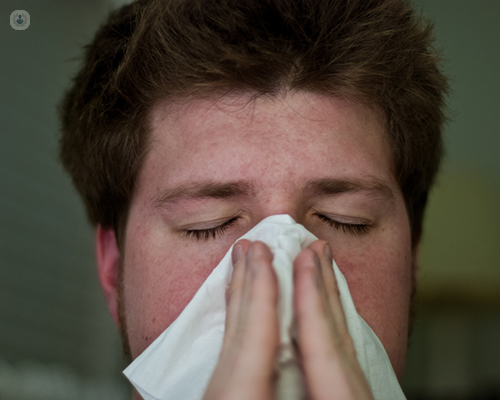 What are the symptoms of sinusitis?

The main symptoms of sinusitis are:

The cause of sinusitis is an infection caused by viruses, fungi or bacteria. When the paranasal openings are blocked, bacteria or other microorganisms can easily grow.

Obstruction of the paranasal openings may be due to:

Can sinusitis be prevented?

What is the treatment for sinusitis?

In general, sinusitis heals on its own and self-care can manage the discomfort, however, if it persists antibiotics can be prescribed.

Some self-care techniques include:

If the symptoms do not disappear with the treatment, it may become necessary to perform surgery to enlarge the opening and to drain the sinuses.

Any cookies that may not be particularly necessary for the website to function and is used specifically to collect user personal data via analytics, ads, other embedded contents are termed as non-necessary cookies. It is mandatory to procure user consent prior to running these cookies on your website.